Cuba is an island in the Caribbean with over 11 million people and it is about 90 miles away from the United States. Up until the late 1950s, it was a prosperous country with an educated middle class as well as a significant upper class, making it the Latin American nation with the highest standard of living.

Havana, the capital and largest city, was known then as the Paris of the Western Hemisphere due to its upscale department stores, fancy restaurants, and a vibrant nightlife that attracted Hollywood stars and the wealthy from all over the world. That all changed after the revolution and the country is unfortunately now classified as a third-world nation.

It is said that Cuban food was created when the native Indians known as Tainos were extinguished and food had to be imported into the island. The Spaniards and other Europeans as well as the African slaves all mixed in their food traditions to create what we know of today as Cuban food.

Upon their arrival in the 1500s, the Spaniards saw that the Indians ate mostly fish, hunting animals, and local vegetables such as corn, cassava, sweet potato, and black beans. Eventually, as the Indian population died, the Spaniards added their own ingredients to these foods. Then the African slaves were brought into to work on the fields since the Indian population was virtually extinct. They brought with them plantain, rice, okra, and taro root. Most of these are still used in modern Cuban meals.  Other migrations that influenced Cuban food were the French plantation owners who fled slave revolts in Haiti and founded coffee plantations in Cuba, and then came the Chinese migration in the nineteenth century and they brought soy sauce, Chinese-style rice, and their sweet and sour flavorings.

The Cuban upper classes favored the French cuisine and hired cooks that were familiar with this cuisine. The chicken fricassee (fricase de pollo) one of the most popular Cuban meals was influenced by French cuisine. 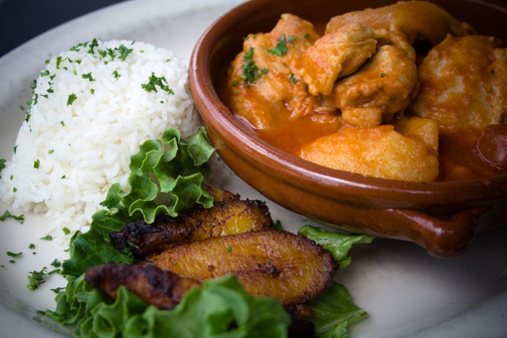 But the locals back then also enjoyed soups such as ajiaco, considered to be Cuba’s national soup which is made from vegetables such as cassava, taro root, sweet potato, plantain, corn,  squash and yam. It is still very popular today and can be found in many restaurants in Miami.

It is boiled in pork, chicken, or other meats and is flavored with sofrito which is a blend of garlic, onion, green peppers, tomatoes, cumin, oregano, and cilantro. Sofrito is the main seasoning that Cubans use for many other dishes such as black beans, rices, meats, and seafood.

Cubans not only like black beans but they also like to eat red beans, kidney beans, white beans and garbanzo beans poured over steamed white rice and served with a side of sweet plantains. These are all traditions that started with the blending of all of these ethnic groups that migrated to the island. 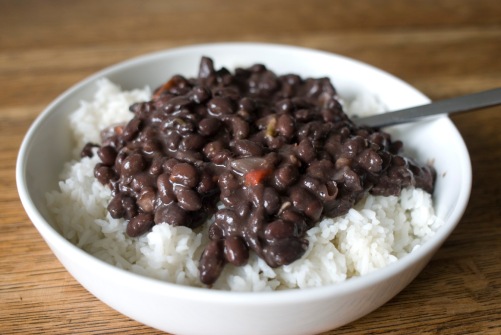 Most certainly the one food that is typically known to be Cuban is roast pork – in Spanish lechon asado or pernil. This is the meal that is served on Noche Buena (Christmas Eve) or New Year’s Eve or at any special gathering. It is a tradition in almost every single Cuban home around the world. It is our signature dish. It is served with either moro rice, or black beans and rice, yucca with mojo sauce, and plantains.  Many Cubans also love the crunchy, well- seasoned, and roasted pigskin and look forward to eating it.

In 2021, the Cuban food traditions continue since those of us that were raised savoring it, still long for it and we want to make sure more people get to taste some of our main dishes and come to love them as much as we do. And thanks to the strong Cuban presence in Miami and other Florida cities, Cuban food will remain with us permanently.